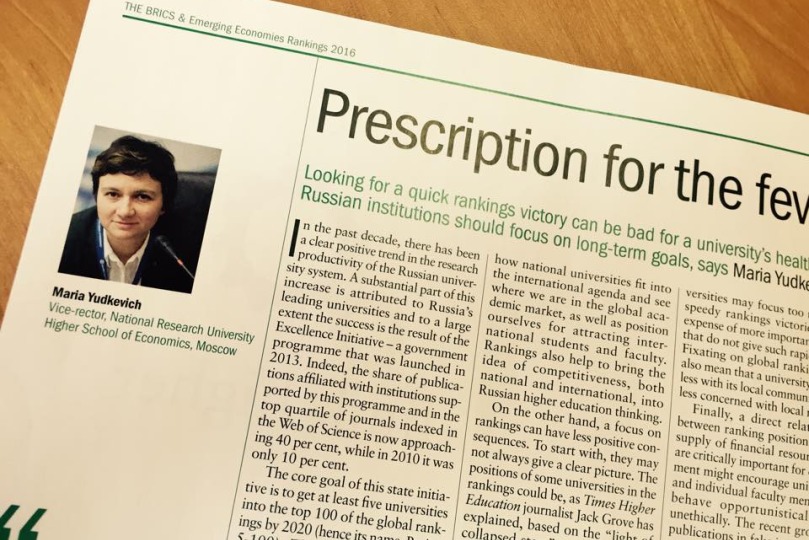 In the past decade, there has been a clear positive trend in the research productivity of the Russian university system. A substantial part of this increase is attributed to Russia’s leading universities and to a large extent the success is the result of the Excellence Initiative – a government programme that was launched in 2013. Indeed, the share of publications affiliated with institutions supported by this programme and in the top quartile of journals indexed in the Web of Science is now approaching 40 per cent, while in 2010 it was only 10 per cent.

The core goal of this state initiative is to get at least five universities into the top 100 of the global rankings by 2020 (hence its name, Project 5-100). The design of this programme assumes that there are direct rewards for climbing up the major global rankings as well as for growth in the indicators that are used in rankings arithmetic (such as research productivity, internationalisation or student-per-teacher ratio).

But is such a strong focus on rankings healthy for the development of a national higher education sector? The answer is yes, and also no.

Without doubt, one of the good things about focusing on rankings is the important objective information that society gets. We can see how national universities fit into the international agenda and see where we are in the global academic market, as well as position ourselves for attracting international students and faculty. Rankings also help to bring the idea of competitiveness, both national and international, into Russian higher education thinking.

On the other hand, a focus on rankings can have less positive consequences. To start with, they may not always give a clear picture. The positions of some universities in the rankings could be, as Times Higher Education journalist Jack Grove has explained, based on the “light of collapsed stars” – reflecting past achievements rather than the current state of affairs. Some universities are now reconsidering their mission given new economic and social conditions (for example, moving away from pure teaching towards deeper cooperation with the research sector) and the pressure to rise up the rankings may be harmful to this process. Such pressure may distort institutions’ long-term goals of creating new knowledge if they are too focused on making a quick impact in other rankings indicators. Without a clear vision, and under severe pressure for immediate rankings results, universities may focus too much on speedy rankings victories at the expense of more important actions that do not give such rapid results. Fixating on global rankings may also mean that a university engages less with its local community and is less concerned with local needs.

Finally, a direct relationship between ranking position and the supply of financial resources that are critically important for development might encourage universities and individual faculty members to behave opportunistically and unethically. The recent growth of publications in fake journals demonstrates this phenomenon.

At the same time, one should not overestimate the power of rankings over the university sector in general. During the past decade, the disciplinary structure of publication output has not shifted towards the G7 average, unlike the other BRICS countries.

Some in higher education now think of rankings as instruments that are dangerous for universities, referring to examples of “ranking fever”. Such a disease can be serious if a university system is not immune to these external pressures. But institutions can resist the fever if they have a clear vision of their mission and objectives, and are able to pursue them without being too financially or politically dependent on their positions in rankings.

Rankings as a source of external pressure should be balanced by some internal meaningfulness, shaped both by academic communities within universities and by governing and regulatory authorities. Mature academic systems do have such internal resources because academic norms and governance structures were formed well in advance of the rise of rankings, and because they are less critically dependent on direct state support.

For BRICS higher education systems that need to reposition themselves in light of new economic and social conditions, this is still a big challenge – and Russia is no exception.