New book about global academic rankings is out 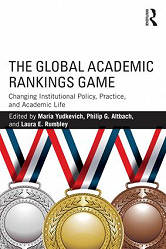 Global academic rankings are both controversial and very influential. For better or worse, they guide student choices regarding where to study, they affect university strategic planning and often faculty promotion, and they sometimes influence government decisions about funding or research priorities. The Global Academic Rankings Game provides a much-needed perspective on how countries and universities react to academic rankings. Based on a unified case methodology of eleven key countries and academic institutions, this comprehensive volume provides expert analysis on this emerging phenomenon, at a time when world rankings are becoming increasingly visible and influential on the international stage. Each chapter provides an overview of government and national policies as well as an in-depth examination of the impact that rankings have played on policy, practice, and academic life in Australia, Chile, China, Germany, Malaysia, the Netherlands, Poland, Russia, Turkey, the United Kingdom, and the United States. The Global Academic Rankings Game contributes to the continuing debate about the influence of rankings in higher education and is an invaluable resource for higher education scholars and administrators as they tackle rankings in their own national and institutional contexts. It is the first book that analyzes how universities react to and are shaped by the “rankings game.”